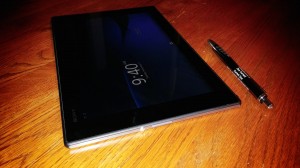 The newest tablet from Sony packs quite a punch. I’ve been checking out the new Sony Xperia Z2 from Verizon for a few weeks and it does everything you could ask of it, including changing the channels on your TV or turning up the stereo. It definitely does not fall into an entry level category.

The Xperia does come in a very thin profile at only 1/4″. Its other two dimensions are quite large however. While its screen falls into the 10.1” screen size category, the 1” of additional bezel around it makes the height and width of the device larger than other similar devices. There is a good inch of dead space around all four sides of the screen. In spite of this, the slimness and lightness make it still feel sleek in the hands.

The screen is bright and crisp and fully HD. Photos, videos, and applications all look great. Since Sony makes TV’s as well, they’ve put a lot of technology into making this tablet look as good as a full size TV in a reduced package. You can watch movies and play video games. You can even get a wireless PlayStation remote for game machine like play.

Sony is also known for music. They didn’t depart from that name with this device. You get 3D Sound from dual speakers on the front side of the tablet on either side of the bottom of the screen. No, it doesn’t sound like you are listening to your home stereo, but it does sound great considering the fact that it is coming from two small speakers on a device that is only 1/4” thick.

All of this technology comes at you from a fully waterproof device. As with the Samsung Galaxy S5 I recently reviewed, this waterproof feature relies on covers for the device’s access ports. There are two on the top edge of the Z2. One accesses the charging port and one accesses the SIM card and external memory slot which accepts up to a 32GB micro-SD card. Now, you’re not going to go scuba diving with it, but it will definitely survive a drop into the shallow end of the pool without any ill effects. It is rated to last 30 minutes in up to 5 feet of water.

The Xperia comes equipped with top of the line internals as well. It boasts a Quad Core 2.3GHz processor, 3GB RAM to keep those apps running smoothly even with some of those memory hogging apps that always seem to be running in the background. It has 32GB of onboard storage as well as an SD Expansion Slot which we already mentioned will accept another 32GB. 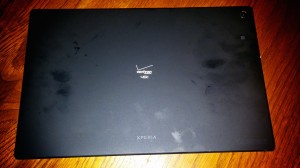 As far as communicating with the outside world, you’ve Near Field Communications (NFC) for instant pairing and instant payments, an IR Remote for controlling your Sony TV or other IR devices, Bluetooth 4.0 communications, multi-band wi-fi, and of course 4G LTE support. All of this packed into a slim package along with the best battery life I’ve experienced.

The Li-ion battery is 3200mAh and Sony uses software management to get incredible lengths of time between charges. I even got excellent battery life when I was using it as a wireless hotspot. I always hesitate to put a length of time on it because it varies so much by what you are doing, but I would imagine for the typical user, you could easily charge it every other day. The included charger uses the standard micro-USB adapter. You can also get an a charging dock that uses magnetic coupling so all you have to do is set the tablet down on it to instantly begin charging and it holds it in a position for easy viewing.

The built in cameras aren’t anything exceptional, but they are fully sufficient to get the job done for most picture taking. Either the front or back will record in HD video. The back shoots at 8MP and the front at 2.2MP. They also include quick settings for special shots such as time burst or panorama. You can also access both the still and video cameras from the main screen with a single button push. There is no reason to “switch” between the modes.

The Xperia operates on a nearly stock installation of Android 4.4 KitKat which I imagine will soon be upgradeable to 5.0. Sony also includes their own multimedia applications for picture viewing, movie watching, music, and game play. One unique feature is that on the task switching screen, they have also included a shortcut menu which allows you to quickly access functions such as camera, calculator, internet, and screen capture. This is a very convenient function that many manufacturers are including in one form or another with their proprietary software installations. 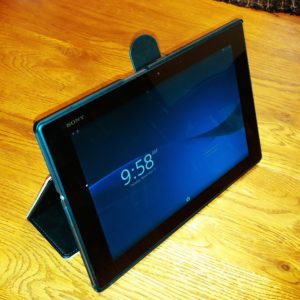 The device also comes with a remote control application to help you connect the device’s IR port with your home devices. There are many available in the Play Store as well.

Xperia Lounge is also included, which is basically just a Sony version of the play store including their movies, music, and apps. An account is required to access the paid features of this app. You do get some credits with the purchase of a new device however.

The test device I reviewed also came with the Incipio Lexington Hard Shell Folio Case. The case is sleek with a black leather-like exterior and a soft suede-like interior. The case can be folded to create a stand and has a nice tabbed closure. Overall it was a nice addition to the Xperia and did a good job of protecting the device without getting in the way. It allows access to all of the buttons, slots, cameras, and doors. 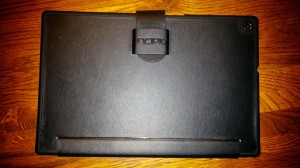 One negative I would mention is something I’ve noticed with a lot of cases and that is that it does not allow full insertion of the headphone plug in some cases. Many of today’s headphones have a very diminutive plug, but not all. I was connecting to a soundboard using a patch cord, and the diameter of the molding around the connection plug was large enough that it interfered with the case and I had to pop the tablet out in order to get full engagement with the jack. Not a huge deal, but something to be aware of if you’re not getting the full sound you are expecting.

Sony has definitely come to play with the Z2 release. It does not have all of the added software features that the highly customized offerings from Samsung provide. It is by no means an entry level device however. It comes with all of the power and capability of the best tablets available and is easy to use and navigate. And again, this is all packaged in a light, thin, and stylish package sure to please anyone.

This device was provided as a demo for my evaluation by Verizon and Kyle Communications. I was in no way compensated for a positive review of this device. These are my unbiased and personal views. 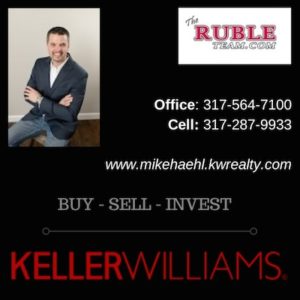